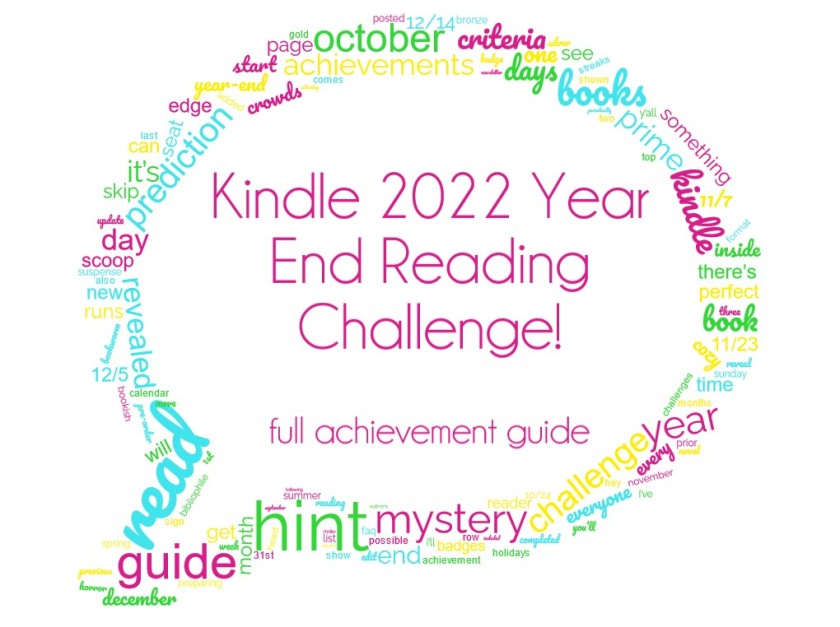 Hey y’all! With the end of September comes the end of the 2022 Summer Reading Challenge from Kindle. You can see all the achievements and badges for that here, and start preparing to move on to the new challenge: the Year End Challenge! This new challenge runs from October 1, 2022 to December 31, 2022 with 15 possible achievements.

Below is a guide to the Kindle Year End Challenge. It’s following the same format as the previous challenges (you can see an FAQ here including links to past and current challenges). Prior to the reveal of the criteria for each mystery badge, the hint will be shown below. As the mystery achievements are revealed, I’ll update this page to show the criteria for each, and then the badge itself once the challenge is completed!

This one runs from October 1st to December 31st, 2022. There are 15 possible achievements.

END_OF_DOCUMENT_TOKEN_TO_BE_REPLACED 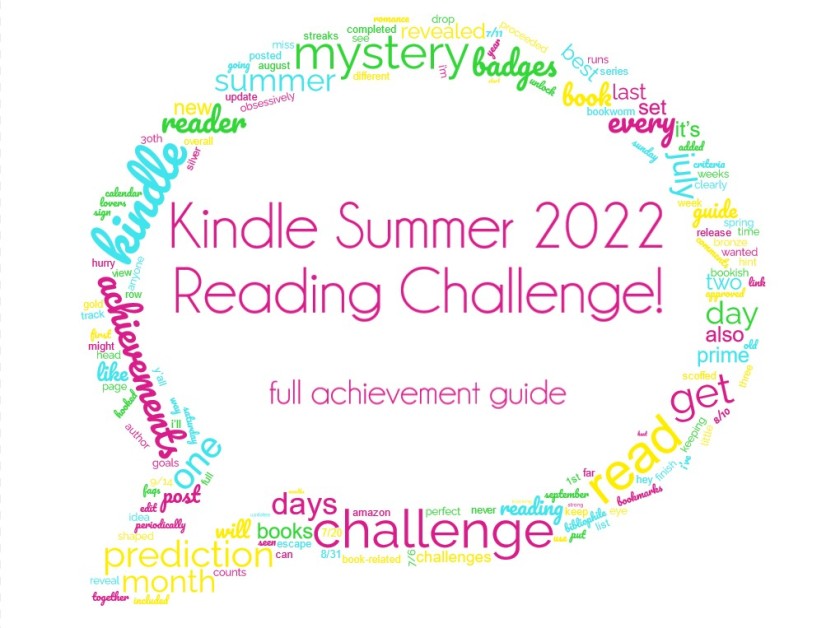 Hey y’all! If you use Kindle, you might have seen last month that they had a Spring Challenge where you could get little badges shaped like bookmarks for different reading and book-related goals they set. I scoffed at the idea that it would get anyone to read more, and then proceeded to obsessively track and get every one of the achievements. You can see them all here. It also has some FAQs on the challenges overall, like what counts as reading and how to view badges from old challenges.

Clearly I’m going to keep that up, so I wanted to put together a new post for their Summer Challenge set! I’ll update these as they reveal the mystery badges and as I unlock the full badges.

Mystery (all are now revealed!)

END_OF_DOCUMENT_TOKEN_TO_BE_REPLACED 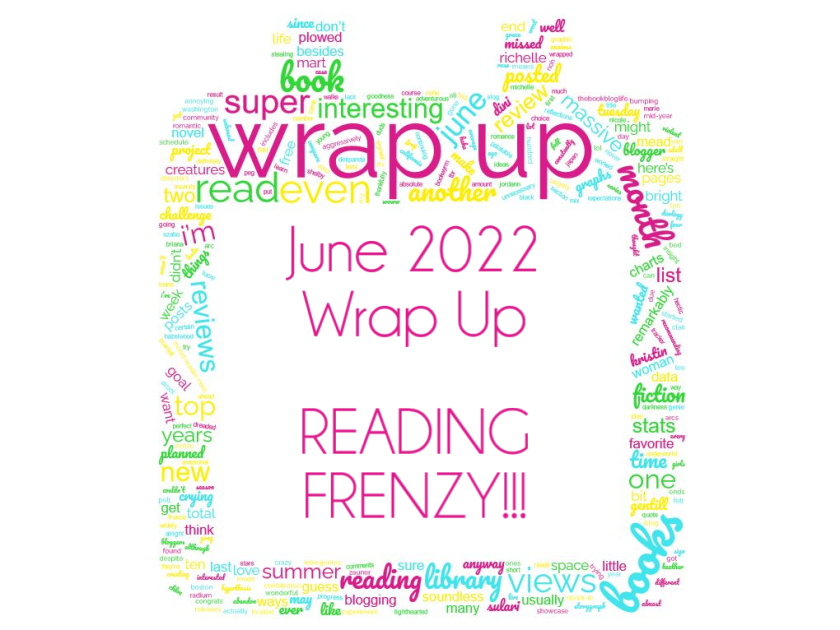 I planned 6 books in my June TBR and of those I read 4, with one in progress and one not started. But in total, I read 15 books so… I guess I plowed through anyway.

A mix of library loans of new releases and books I had on my shelves but hadn’t read, this was the goal for June.

WOWW did I ever want to abandon two other books in this list: Crying in H Mart and Remarkably Bright Creatures were both duds for me in different ways, and I super wanted to stop reading them. But since I’ve met my quantity goal for the year, I’m pushing myself to read more widely and things I might not usually try. That includes continuing with books even when they’re a struggle or I would usually ditch them due to my mood-reader-ness. I think the slog of those are partly why I read so much: trying to break them up to make them more palatable. xD

Besides those two, I plowed through a ton of other books. I peg this largely on the 20 (15) books of summer challenge that i joined a little bit into June where you have to read and review a certain number of books in the summer. I may have gone aggressively into that list, and even posted ONLY reviews for like a week straight which was an interesting experiment.

Here’s a massive list of all the reviews that came up in June, because I went on an absolute tear there for a minute.

Last month I put an unnecessary amount of time into creating my own charts and graphs and such of my reading tracker, on top of all the wonderful charts and graphs and data that Storygraph tracks for me. So to showcase that a bit, here’s a little section for all the data people like me out there to drool over. 😍

END_OF_DOCUMENT_TOKEN_TO_BE_REPLACED

Just a quick note that I currently am healing from an injury that makes typing difficult, hence the recent lack of posts. I’m hoping to get a few up this week as I’m improving, but formatting might be less polished than usual.

Back soon hopefully. Wish me luck!

Hey y’all! This post is definitely inspired by my own lack of inspiration right now. So since I can’t seem to get something solid out of my mushy brain at the moment, I came up with some ideas for what to do next time this happens! For me, for you, for anyone — if you’re feeling stuck give these a go!

END_OF_DOCUMENT_TOKEN_TO_BE_REPLACED 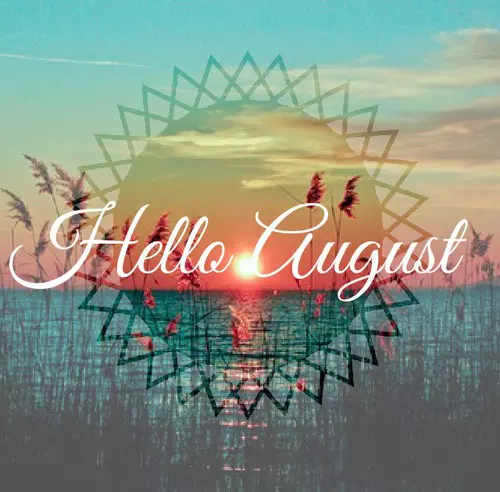 There were a few accidents in here. Like I chose Heartsongs with the idea of adding a nice bit of poetry to my reading. However, I didn’t realize that Heartsongs was written by a child. Like, a five year old. And it shows. Even the best poetry by a five year old is still about underwear and his favorite foods. That was disappointing since my expectations were drastically different, so if anyone has some recommendations of favorite poetry collections, let me know!

END_OF_DOCUMENT_TOKEN_TO_BE_REPLACED

How many of my planned books did I read:
I think I planned ten, but that was late in the month so it was really like I had already started reading and/or finished a few, and then I added a few more to those. And then proceeded to read completely different things. xD I ended up reading twelve books.

I got an ARC that I have been absolutely thrilled to get a chance to read: To Sleep In A Sea of Stars. It’s a dense one by Christopher Paolini, so totally in keeping with his usual. It comes out in September, and I’m fangirling pretty hard about it right now. 🥰 I legitimately did a happy squealing dance when I opened the package and my boyfriend watched me hop around the kitchen like a madwoman with no judgment in his eyes. That’s love. 😉

My informational-audibook-while-gaming strategy continued nicely, and I got through Invisible Women by Caroline Perez Criado. This was an enlightening and enraging and tiring and baffling book, yet again. I’m doing a lot of those lately. I realized an issue with audiobooks of nonfiction though: it’s harder to take notes like I usually would with highlights and bookmarks when it’s a spoken version. There was so much data and facts and research that I wish I could have bookmarked some of the more outrageous realities. But one that stuck with me is that the leading killer of women worldwide is oven pollution. Just having shitty ovens that give off crappy fumes. That and the fact that crash test dummies don’t ever account for women. Not even as passengers, where women are most likely to be (a separate issue). Jeez, I’m falling into this trap of ranting about it – I’ll just have to a full post. 😄

END_OF_DOCUMENT_TOKEN_TO_BE_REPLACED 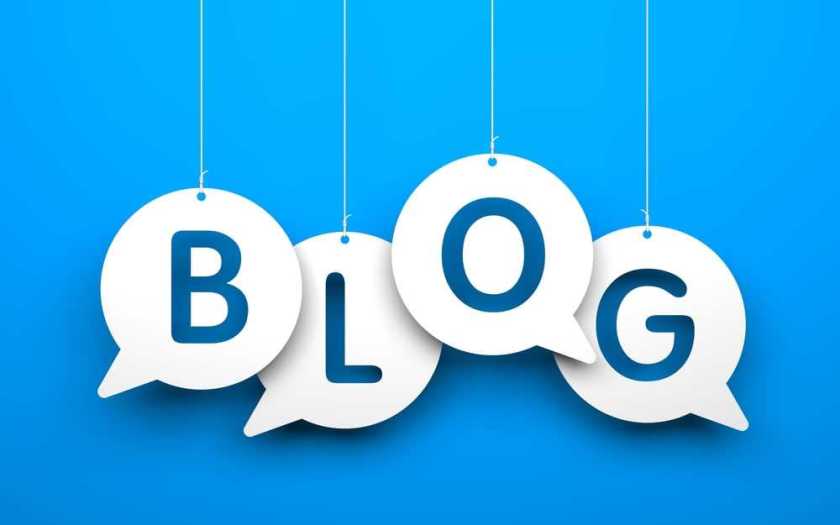 I’ve been blogging for over a year now, which is a big exciting accomplishment for me! And yet, it wasn’t until this week that I stopped and thought about how weird the word blog is. It doesn’t sound very nice; in fact it sounds more like a sound you might make while throwing up. 😶

So let’s take a look and find out exactly why there’s a whole community built around this bizarre word and wonderful hobby. ^.^

Origins of the word ‘blog’

What does it mean?
In this sense, it’s defined as an online journal

What did it come from?
This was a shortened and tweaked version of “web log,” which was originally a record of server requests.

Web, from World Wide Web. Not sure how many of y’all are old enough / young enough to remember that URLs used to begin with www, but that’s what it came from!

Log, in the sense of a record of observations, thoughts, etc. Think old sea captains, or Star Trek.

It’s not a new one, though!

Even though blogging in the sense we use it for writing online is still new, the word blog itself has been used in many other ways through the years. The etymology stretches back:

Alright y’all, I’ve got something to celebrate! A few things, actually, which is really nice these days.

I’ve been blogging here for over a year now. OVER A YEAR.

This might seem paltry to some people (like those who just celebrated their ninth year of blogging…) but for me this is huge. I had tried blogging before, and specifically about books, and I just did not keep up with it. I’m also terrible in general at doing things every day (which is why my success with my 365 photo project was also a big deal for me). So, yes, for me this is a big exciting deal!

I also have to laugh when I look back at last year when I started compared to now, a year later. Not only because the world looks very different, but because my blogging habits do too. Wildly so. Let’s share that laugh, shall we?