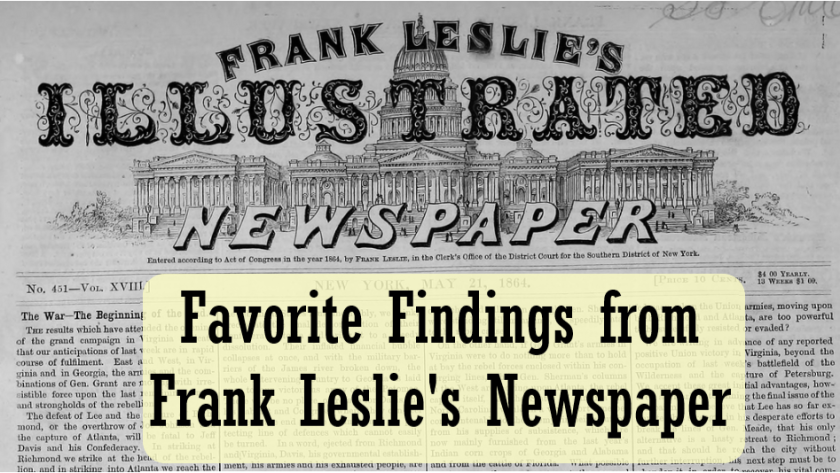 Me: Noo… See, I found this old post I wrote in college about a project where I read an old newspaper from the 1800s and I went to the link to the newspaper and it’s still up and I started reading it again and it’s really interesting so now I’ve just been reading this newspaper from 1864.

And so I bring y’all some of my favorite selections from the May 7, 1864 edition of the United States newspaper Frank Leslie’s Illustrated Newspaper. I’ve included clippings of the actual scanned newspapers, but ones that are tougher to read I’ll write out as well. 🙂

A rather droll thing occurred at one of the stands in the refreshment room on Tuesday evening. A stout, good-looking man, apparently a Britisher, looking with admiring eyes upon a young lady attendant, asked, in a half-joking way, the price of certain cakes, and received for an answer, ten cents each. He said the price was low enough, and he should like to eat some of them, were it not for the trouble of taking off his gloves. The fair lady suggested that he should eat them with his gloves on, but to that he objected, as it would soil them. The next proposition emanating from the fair shopkeeper, who did not like to lose a customer, was that she should feed him, an offer that was accepted with an expression of countenance that plainly said, “You won’t dare to do it!”

But the damsel was not to be taken aback, and with delicate diamond fingers she broke up the edibles and put them piece by piece into the mouth of the eater until he had devoured five! This was a fair test of her daring, and as the job was done with perfect gravity, the purchaser could hot help to be satisfied, and, after wiping his mouth, proffered a $5 greenback in payment, and received back $2 change. To the question as to how the feat was performed he received answer that 10 cents each for each of the cakes made 50 cents, and 50 cents each for the labor performed in feeding, summed up to $3! If he did not leave a wiser man he did a poorer one, by $3.

I love that this is what constituted a daring thing to do! It is weird AF though, can you imagine this happening now? It would be super weird. xD For context, there was a big fair with booths and such going on, which is when this occurred.

A Bavarian professor announces that in 1865 a comet shall come so close as to endanger this our earth; and should it not attach itself to the earth as one globule of quicksilver to another, nor annihilate us, the sign will be most beautiful to behold. During three nights we shall have no darkness, but be bathed in the brilliant light of the blazing train.

In Rhode island, regiment are 14 brothers named Postly. Four of them are twins.

I especially love the dryness with which our potential annihilation is given in the first item here, and the second was amusing for it’s content and the fact that they felt it WAS content to be included in the newspaper. xD

Some things never change! Marriage and learning how to get the person you’re interested to like you back is always an alluring prospect. And the mustaches just made me laugh. xD