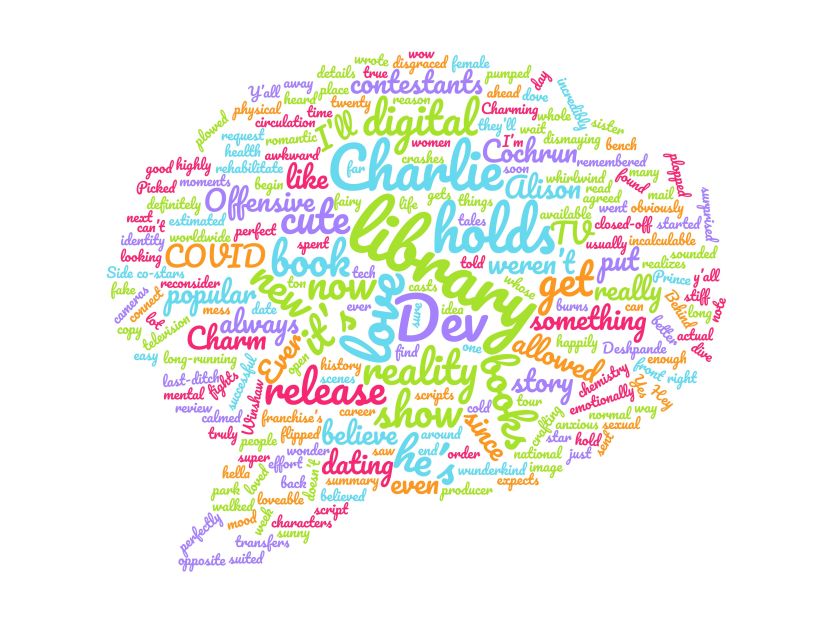 I had heard of this new release that sounded super cute and just like what I was looking for: The Charm Offensive by Alison Cochrun. I’ll put the book details at the end, but it’s a lot of fake dating and reality TV and mental health and sexual identity and cute AF moments with truly loveable, whole characters.

So obviously I was incredibly pumped to read this, until I went to place a hold on it from the library and saw something like 82 people ahead of me and an estimated wait time that was “incalculable” because it was so long. 😅 That was dismaying, but then I remembered something:

The library has actual books, and I’m allowed to get them again.

Yes!! Because COVID has now calmed down the library books are back in normal circulation! And sure enough, I found a copy in a sister library that allowed transfers and it was put in the mail and on it’s way to me in under a week. ^.^ I was so surprised that there weren’t a ton of holds on this hella cute new release since there were so many digital holds!

Y’all, I plowed through this book by the next day because it was that good and perfectly suited to my mood. Picked it up from the library, walked to the park, plopped down on a sunny bench, and dove in. And wow, was it easy to dive in. I really loved this one!! I’ll have a review up soon (and since I wrote this, I definitely have to do it now 🤣).

Side note that I can’t believe how digital holds are now the highly popular request, and I can get the physical book of a popular new release sent to me right away. I started with digital holds for the opposite reason — they were usually available, and the books weren’t! COVID really flipped things around.

The Charm Offensive by Alison Cochrun

Dev Deshpande has always believed in fairy tales. So it’s no wonder then that he’s spent his career crafting them on the long-running reality dating show Ever After. As the most successful producer in the franchise’s history, Dev always scripts the perfect love story for his contestants, even as his own love life crashes and burns. But then the show casts disgraced tech wunderkind Charlie Winshaw as its star.

Charlie is far from the romantic Prince Charming Ever After expects. He doesn’t believe in true love, and only agreed to the show as a last-ditch effort to rehabilitate his image. In front of the cameras, he’s a stiff, anxious mess with no idea how to date twenty women on national television. Behind the scenes, he’s cold, awkward, and emotionally closed-off.

As Dev fights to get Charlie to connect with the contestants on a whirlwind, worldwide tour, they begin to open up to each other, and Charlie realizes he has better chemistry with Dev than with any of his female co-stars. But even reality TV has a script, and in order to find to happily ever after, they’ll have to reconsider whose love story gets told.

2 thoughts on “How the times have flipped!!!”