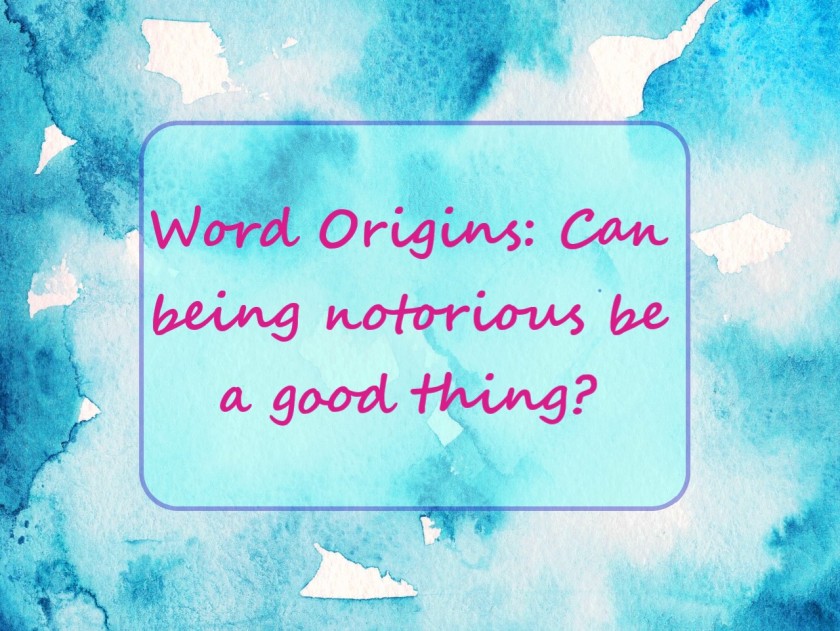 Connotation is one of my favorite things about language. Connotation shapes our language so much, and in such a natural way that you’d rarely even realize it was happening. Words pick up new meanings, and sometimes are made into completely opposite or entirely different meanings than where they began.

Notorious is a wonderful word. It feels salacious and darkly intriguing and bad-boy-ish. It’s just a tiny bit dangerous, but probably not so much as to be truly perilous. Just enough to be… interesting.

But has it always meant that? Was being notorious once a good thing? Or have villains and playboys been notorious for all time?

What does it mean?
then: publicly known or spoken about; well known
now: low-key famous for something bad or negative (a personality trait, an action, etc)

What did it come from?
The Latin noscere (come to know) is the root of this one. From there, it went to notus, meaning “known”, and then on to Medieval Latin’s notorius meaning “commonly known.”

So originally, yes! You could be a medieval dad who was notorious for making the best bread around! But now…

“noted for some bad practice or quality, notable in a bad sense, widely but discreditably known”

Okay, well, now if you’re notorious that’s not a great thing for your reputation. Since the 17th century it’s been largely associated with bad things. As we know, bad news travels faster than good right? It’s the old theory that someone will tell one person about a good experience with a business, but will tell ten people about a bad experience. The worse it is, the more people are going to hear about it!

Enough people got known for doing naughty things that the word notorious was more often than not paired with something negative, and so it adopted that common usage into it’s meaning (connotation!! I love it!!). Lo and behold, notoriety is now something you’d prefer to avoid.

(The noun form notoriety came around in the 1590s and was officially meant as “the state of being unfavorably known.”)

What are you notorious for?

I think I would be notorious for eating a lot of sweets and being too perky in the morning. My coworkers weren’t always a fan of my morning-person attitude at nine am. 😂 Or possibly I would be notorious as the girl who gets really weird about drinking alcohol for no clear reason, because I did until relatively recently. I’ve found my niche with it, but I’m certainly not a lush.

So now I’m going to run off and read that book up top, Notorious by Minerva Spencer. I’m a lucky duck who got an advanced copy, and it will be released on November 24, 2020! (Pushed out a bit from the original date, but what can you do.) It’s a regency romance, and so of course there’s a man known for his rakish ways, and a woman known for being stubbornly intelligent (as is SO unbecoming for a posh young lady… 🙄). I’m super excited for this one! After my month of horror and creepiness, I’m looking forward to a bit of sweet and spicy romance!

One thought on “Word Origins: Can being notorious be a good thing?”