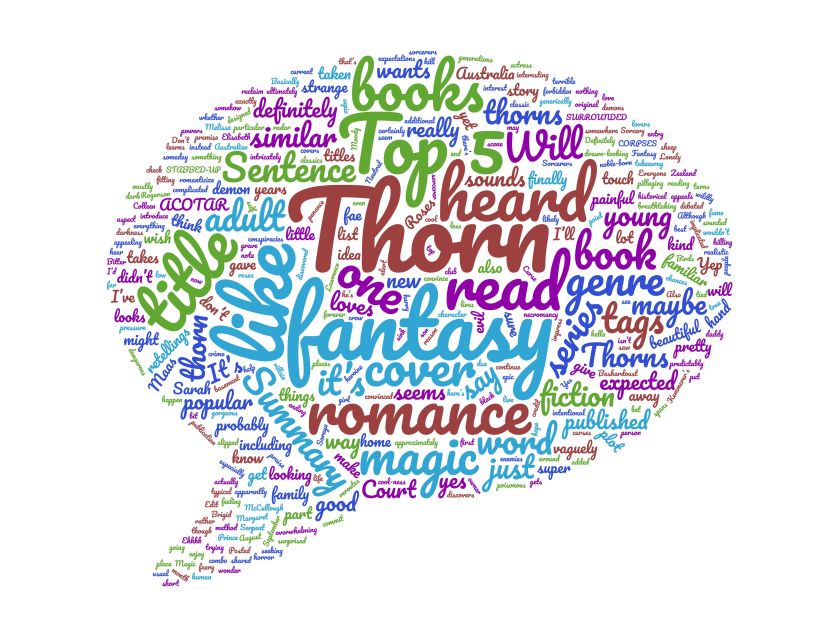 This month I read Court of Bitter Thorn by Kay L Moody, and it was exactly what I expected: similar to A Court of Thorns and Roses and A Curse So Dark and Lonely. Which is to say that it was good, but not terrible original. The cover looks so similar to Brigid Kemmerer’s that you’d think they were part of the same series, and 75% of the title is shared with ACOTAR.

Don’t get me wrong, it was a good book! But it’s so similar to these other wildly popular books that I had to wonder what the most popular books with the word “thorn” are. Because I had a pretty good bet as to what they would tend to be. 😂

1. A Court of Thorns and Roses by Sarah J Maas

No one is surprised.

2 Sentence Summary:
A human girl is taken to the land of fae as penance for killing a faery. Basically everything there wants to kill her, and she just wants to get away from the weird gorgeous fae lord who has taken a strange interest in her.

Have I heard of / read this before?
Oh yes. I’ve heard of this. I did also finally read it, years after its publication.

Do I like the cover?
Neutral. It’s not ugly, but it’s not breathtaking. Kind of strange for a fantasy by Sarah J Maas, really.

Will I read it?
I did! I finally gave in. All these years, I had a feeling it wouldn’t really impress me, especially with the added pressure of the hype around the book and series. Everyone loves it. So predictably, I didn’t. In short, took forever for things to happen and the romance was weak at best. One character introduce at the end might convince me to continue the series. But not in any hurry.

2 Sentence Summary:
Soraya is definitely poisonous to touch. She might also be evil, if the demon in the basement gets its way.

Have I heard of / read this before?
Yep, I’ve heard of this one! It’s been on my list, and I think it’s a book club read for September — I’ll have to check!

Do I like the cover?
Yes, as it seems fitting to pretty up the dangerous things in it. But again… it’s super similar to other covers. This popular one in particular, just with white instead of black.

Will I read it?
Yep! I debated a lot on whether this one sounded like I would enjoy it or not… but ultimately, the aspect of demons and the MC maybe being a villain convinced me to give it a shot. I really hope it lives up to the expectations!

3. Sorcery of Thorns by Margaret Rogerson

2 Sentence Summary:
Sorcerers are hella evil, but after Elisabeth is implicated in a grave crime she didn’t commit, the only person she has to rely on for help is a sorcerer. As she learns more, she discovers that sorcerers — and even her own self — may be more complicated than she gave credit for.

Have I heard of / read this before?
It sounds vaguely familiar, but somehow this slipped my radar.

Do I like the cover?
It’s generically cool, in the typical current fantasy heroine kind of way.

Will I read it?
YES?! OMG, how did I not hear about this before? It has:

So, yes. I will be reading this.

4. Prince of Thorns by Mark Lawrence

2 Sentence Summary:
The noble-born son turns to darkness and pillaging. And now, he’s going home to reclaim what should be his.

Have I heard of / read this before?
Have not heard of this! Although the cover seems vaguely familiar, so maybe I saw it in a list at some point/

Do I like the cover?
I do, mostly, though I wish it were a touch less… drawn-looking? I don’t know how to say it. I would rather see it a little more realistic looking to make the horror of the scene actually sink in. DUDE IS SURROUNDED BY STABBED-UP CORPSES.

Will I read it?
Ehhhh… I wish I could say yes, but the premise just sounds a bit too much like it would have a whiny little kid who wants his daddy to like him. The whole necromancy thing super appeals to me, but the combo of the “seeking family praise” takes a lot of the expected cool-ness from it.

5. The Thorn Birds by Colleen McCullough

2 Sentence Summary:
A family reroutes to an Australian sheep farm and make their way through their new life. The story spans generations, ending with an actress trying to find fame far away from home. (Also apparently there’s a forbidden romance somewhere in there.)

Have I heard of / read this before?
Definitely have not heard of this one.

Do I like the cover?
Nope. It was published in 1977, but it looks like it was designed in 1915. I know that’s intentional due to the plot, but yikes is it not appealing. And all in sepia? Nah.

Will I read it?
On the one hand, approximately nothing about the plot sounds interesting. On the other hand, it takes place in Australia and New Zealand and I love books in places where I don’t live. I’d say the chances are low, but maybe someday I’ll be looking for a classic read — which this certainly is — and give it a go.

Fantasy is the overwhelming owner of the word “thorn” in book titles!

So as expected, most of the books read with the word “thorn” in the title are in the young adult fantasy genre. I have no idea why thorns seem to be intricately tied with magic and curses, but it’s likely the same reason people romanticize the idea of roses as being beautiful yet painful (what with the thorns and all). Magic definitely seems like something that would be (is???) beautiful and painful.

So here’s the takeaway: if you like this kind of story, just put a book alert for new titles published with the word thorn! Or maybe with the word crow because that will definitely work, too. 😂

An additional note here that if I did the true top 5, it would have been all of the books in the ACOTAR series, including the one that isn’t published yet. So I stuck to my usual method with these of only including the first entry for any books that are part of a series.

5 thoughts on “Top 5 books with Thorn in the title (fantasy sure loves its thorns!)”

Jennifer's ReaderRank
Jennifer has reviewed 603 books with an average rating of 3.366 out of 5.
35 people have found Jennifer's written reviews to be helpful on Goodreads.
See more...